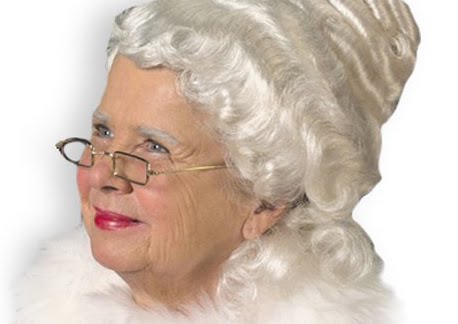 I do love my husband, Nick. He means so well, and his presence around the world and dedication really does mean a lot to a large number of people.

But you know, lately he’s been getting ideas from reading people’s christmas lists. They used to be such easy gifts for our troupe of elves to make, and for Santa to deliver. But around 2007, when we were making preparations to move our base of operations in preparation for the massive ice melt that was upon us, there was this one christmas list he read to me… it said, “All I want for Christmas is a binding agreement on carbon emissions from the world’s leading emitters”. Normally we just bin those and place coal in their stockings, but the irony of giving someone who wanted action on climate change a lump of coal… especially since they had, well, pretty much zero in the “naughty” deeds for the year… he changed.

In the coming years, he started reading more and more of the crazy people’s notes to me. I tried to humor him and to play it down, reminded him that people have been asking for the US government to admit to not making it to the moon for decades, that alien landings had occurred. Of course we know the truth—there’s no way you can make it around the world in a single night without advanced space flight, naturally, we even did a special trip to that rock in 1972 to drop some special gifts to Will, John and Floyd. So those didn’t affect him in the same way.

One of them he read, “All I want is for an investigation into the truth behind 9/11—just some questions asked, that’s all”, after the elves refused to do anything which did not involve manufacturing, he actually took it upon himself to do, calling it “a prima facie valid question”

Hours he watched YouTube videos such as Loose Change, reading on the internet, and even attended seminars by Richard Gage. I tried to get help for him, I really did. And now look what he’s written in the only newspaper that will take his columns. After I sent him to AE911Truth.info, that he didn’t read, dismissing it as “nonsense from the inside” while I watched him immediately go back to his favorite sites.

I tried to tell him that the intelligence community sends through dozens of warnings which don’t eventuate in an attack, and that the August 6th briefing was probably just a case of “crying wolf”. And so it is true that instead of going after the person actually responsible for the deaths of these 5,000+ people, they went after someone they thought was involved but turned out not to be. “Nick”, I said, “you remember 1988, how we gave Saddam a lump of coal for every Kurd he ordered poisoned in Iraq?” Something had to be done, if you ask me. The war was disastrous for the people, but as Christians we know that those innocents often get a free pass to heaven if they are caught in the crossfire like that. And of course the Whitehouse entertained the leaders of these people from around the world—how many nations smiled politely and looked the other way while they entertained Gaddafi and his tent full of women? Some things you just have to do in international politics. Mr. Bin Laden was mild–mannered in comparison.

I told him that the physics of impacts can lead to greater temperatures than possible by combustion of jet fuel. I told him that the X–ray technique used to identify the material in the dust “nano–thermite” was incapable of distinguishing between thermite and mica, and that they’d probably just found the paint used to cover the beams.

I sent him a Janurary 2002 scientific paper explaining why it was that the building did not fall like a tree, but mostly straight down: that’s the physics of large structures! I pointed out how it explained that the “2 or 3 times the strength they needed to be” of the structure was an order of magnitude below what it would need to have been to stop the falling mass of steel and concrete. And when I told him about how the “live cross” from the BBC was actually in a studio… he accused me of believing in fairy tales! Honestly! Santa Claus really accused me of that!

Thankfully, he usually shuts up when I ask him to name me one person who has been labeled an “enemy combatant” or disappeared for “asking simple questions”.

I just hope it doesn’t get in the way of his work.